10 reasons why farmers are in distress

10 reasons why farmers are in distress 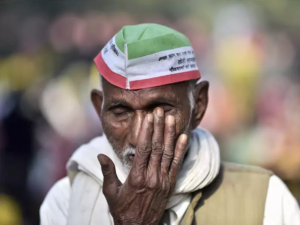 NEW DELHI: When the poll results came in on Tuesday, one thing was clear: BJP had taken a hit in rural areas. And this despite the Centre allocating large sums for several schemes to boost farmer incomes. So what went wrong? TOI takes a look at the stress points hurting the sector.

Two successive years of drought (2014, 2015) have taken a toll on the farm sector. The government has allocated significant funds for the sector but slow implementation of projects has not eased the pain. Drought in Maharashtra, Gujarat and Karnataka have also added to farmers’ woes.

Prices have collapsed for farm commodities. Low international prices have meant exports have been hit while imports have hurt prices at home. For example, there was a bumper production of pulses in 2016-17 but imports of nearly 6.6 million tonnes arrived, compounding the problem. In 2017-18, another 5.6 million tonnes flowed in, depressing domestic prices further. The government delayed imposing tariffs on imports, which heightened the problem of prices for farmers. According to a Niti Aayog paper, on average, farmers

do not realise remunerative prices due to limited reach of the minimum support prices (MSP) and an agricultural marketing system that delivers only a small fraction of the final price to the actual farmer.

The Pradhan Mantri Fasal Bima Yojana was launched in 2016 to provide insurance and financial support to farmers in the event of failure of any crops due to natural calamities, pests and diseases. It was also meant to stabilise the income of farmers and ensure they remain in farming. But the scheme has seen lower enrolments due to a string of factors, including high premiums and lack of innovation by insurance firms.

Irrigation is crucial for the farm sector, where large tracts of land still depend on monsoon rains. The Centre launched the Rs 40,000-crore Long-Term Irrigation Fund, operated by the National Bank for Agriculture and Rural Development (Nabard). Under this programme, 99 large irrigation projects were to be completed by December 2019 but the progress so far has been limited. Experts say a number of factors, including bureaucratic delays and slow implementation by states, have hurt progress for this crucial input.

According to a Niti Aayog document, farm sector development has ignored the potential of marketing. Archaic laws still hobble the sector. Access of farmers to well-developed markets remains an issue although several initiatives have been launched to develop an electronic market place. Reforms to the APMC Act have been slow and most states have dragged their feet on it. Experts suggest an entity such as the GST Council to bring together states and the Centre to jointly take decisions to reform the sector and provide better access to markets for farmers. According to the Organisation for Economic Cooperation and Development (OECD), the combination of market regulations and infrastructure deficiencies leads to a price depressing effect on the sector.

Introduction of latest technology has been limited due to a number of reasons. Access to modern technology could act as a boost to productivity through improved variety of seeds, farm implements and farming technology. According to a Niti Aayog paper, there has been no real technological breakthrough in recent times.

Large gaps in storage, cold chains and limited connectivity have added to the woes of farmers. It has also added to the significant post-harvest losses of fruit and vegetables, estimated at 4% to 16% of the total output, according to the OECD.

This has meant that there is little incentives for farmers to diversify. According to an OECD document, share of high-value sectors in food processing is low with fruit, vegetable and meat products accounting for 5% and 8% of the total value of output compared to cereal based products at 21% and oilseeds at 18%

A government-appointed panel had recommended that FCI hand over all procurement operations of wheat, paddy and rice to states that have gained sufficient experience in this regard and have created reasonable infrastructure for procurement. These states are Andhra Pradesh, Chhattisgarh, Haryana, Madhya Pradesh. It had suggested a complete overhaul of FCI and recommended that farmers be given direct cash subsidy (of about Rs 7000/ha) and fertiliser sector deregulated. The panel had said direct cash subsidy to farmers will go a long way to help those who take loans from money lenders at exorbitant interest rates to buy fertilisers or other inputs, thus relieving some distress in the agrarian sector. The report has been put in cold storage.

The share of the farm sector in GDP has declined from 29% in 1990 to about 17% in 2016, but it remains a major source of employment. According to OECD data, 85% of operational land holdings are less than 2 hectares and account for 45% of the total cropped area. Only 5% of farmers work on land holding larger than 4 hectares, according to the Agricultural Census, 2016. Productivity lags other Asian economies such as China, Vietnam and Thailand and average yields are low compared to other global producers. Wheat and rice yields are nearly 3 times lower than world yields while those for mango, banana, onion or potato are between 2 and 7 times lower than the highest yields achieved globally, according to the OECD.