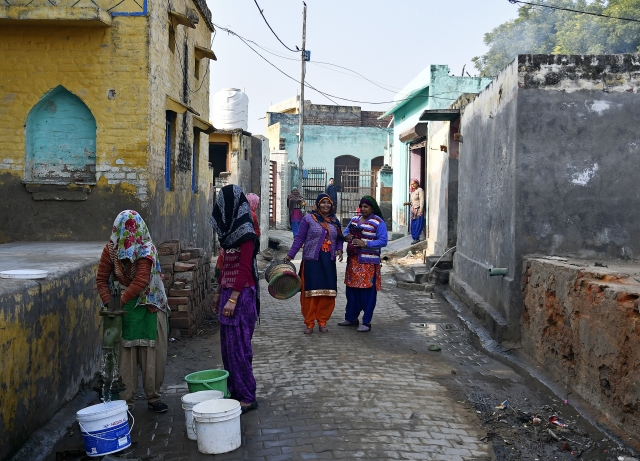 More than 163 million Indians—more than the population of Russia—don’t have access to safe drinking water, and the national rural drinking water programme, despite spending 90 percent of Rs 89,956 crore over five years to 2017, has “failed” its targets, according to an August 2018 report from the government’s auditor.

The programme’s target: Providing 35 percent of rural households with water connections and 40 litre—about two buckets—of water per person per day. Less than half that target was achieved, thanks to “poor execution” and “weak contract management”, said the audit report from the Comptroller and Auditor General (CAG).

About 78 percent of 1.7 million rural Indian habitations have access to the minimum required quantity of water, 40 litres—roughly two buckets of water—per person per day, but that doesn’t mean they actually get this water, experts said. Nearly 18 percent of rural habitations get less than 40 litres per person per day under the National Rural Drinking Water Programme (NRDWP), according to a July 2018 government response to Parliament.

NRDWP is a centrally sponsored scheme aimed at providing every person in rural India with “adequate, safe water” for drinking, cooking and other domestic basic needs in a “sustainable manner”, according to the ministry of drinking water and sanitation website. The scheme providesfinancial and technical assistance to state governments to install rural drinking water connections.

The “coverage of rural habitations increased by only 8 percent at 40 lpcd (litres per capita per day or water available per person) and 5.5 percent on the basis of 55 lpcd during 2012-17 despite the expenditure of Rs 81,168 crore”, noted the CAG performance audit of the NRDWP.

Nearly 163 million people lack access to clean water close to their homes in India—which is more than two-and-a-half times the number in Ethiopia, second in the list of countries with people without access to safe water.

The target was to provide all rural habitations, government schools and anganwadis (government-run daycare centres) access to safe drinking water, 50 percent of the rural population with potable drinking water (55 litres per capita per day, or lpcd) by piped water supply, and 35 percent of rural households with household connections.

The 55 lpcd target for half the rural population was to be provided within the “household premises or at a horizontal or vertical distance of not more than 100 m” without “barriers of social or financial discrimination”, said a 2013 NRDWP guideline.

One of the goals of the ministry of drinking water and sanitation’s 2011-2022 strategic plan was that every rural Indian would have access to 70 lpcd within his or her household premises or at a horizontal or vertical distance of not more than 50 m.

“Recently, the NRDWP has been restructured towards improving efficiency,” Parameswaran Iyer, secretary, ministry of drinking water and sanitation, told IndiaSpend in an interview published on Oct. 5, 2018. “The NRDWP reforms have moved the programme towards effective implementation, stronger monitoring mechanism, and competitive and challenge mode funding (providing financial contributions to achieve social outcomes to be delivered by the private sector).”

Rs 23,050 crore has been approved for the programme over two years to 2020 after the union cabinet approved the NRDWP restructuring, said a Nov. 2017 government press release.

While the government is restructuring the programme, experts said it may still be hard to meet targets.

There is “increasing concern” that access does not translate to availability, Veena Srinivasan, fellow at the Ashoka Trust for Research in Ecology and the Environment, an advocacy, told IndiaSpend. “I agree with the point made in the CAG’s report. In general, spending on independent monitoring and evaluation is very low and monitoring and evaluation budgets are rarely spent.”

“As per the government, the current coverage of households through piped water supply is only 17 percent,” VK Madhavan, chief executive of the non-governmental organisation WaterAid India, told IndiaSpend. “This is going to be a huge challenge. Irrespective of the source of water, in most parts of rural India, availability of water decreases dramatically in the summer months as the water levels drop and surface sources may dry up.”

India’s estimated per capita availability of water in 2025 will be 1,341 cubic metre (cu.m). This may further fall to 1,140 cu.m in 2050, bringing it closer to becoming water-scarce, according to a 2017 assessment by the ministry of water resources, IndiaSpend reported on Dec. 30, 2017. Over the decade ending 2011, water availability reduced by 15 percent in India.

The data shared by the government “greatly obscure” the “dry pipe problem”—a reference to non availability of water despite the existence of an asset—and especially the seasonality, in that many villages depend on tankers, said Srinivasan.

Experts said India needed to look beyond the quantity of water to quality and reliability as well.

“Unless we look at quality, quantity, access and reliability as a measure for water security, it will only be about creating assets,” Karthik Seshan, Manager-WATSAN Programme, Arghyam, a philanthropy, told IndiaSpend.

The data on the government’s information system do not, often, reflect reality, said Seshan.

“For example, we have found that arsenic contamination in some areas of Paschim Champaran district (in north western Bihar), where we have done some research, is much higher than the prescribed standard of 10 parts per billion (ppb); in some cases as high as 397 ppb (Khap Tola in Paschim Champaran),” said Seshan. “But in IMIS (integrated management information system), these regions aren’t even identified as arsenic affected.”

There are 69,258 “water-quality-affected habitations”, home to nearly 46 million people—equivalent to the population of Odisha—according to government data.

“Our infrastructure to test for water quality is abysmal,” said Madhavan of Water Aid. “Most district labs are faced with shortages of equipment and people.”

The National Water Quality Sub-Mission, started by the drinking-water ministry in Feb. 2017, will address the “urgent need” for clean drinking water in about 28,000 arsenic- and fluoride-affected identified habitations. The Centre will need to contribute about Rs 12,500 crore over four years to March 2021, noted the Nov. 2017 government press release.

(Paliath is an analyst with IndiaSpend.)

This article was published in a special arrangement with IndiaSpend.