17 polluted rivers: Karnataka to make them fit for bathing

17 polluted rivers: Karnataka to make them fit for bathing

BENGALURU: There’s fresh hope for some highly polluted stretches of the Cauvery, Kabini and Arkavathi rivers, with the Karnataka government forming a “river rejuvenation committee” in accordance with directions the National Green Tribunal (NGT) issued in September.

The NGT noted on September 20 that in the assessment of the Central Pollution Control Board (CPCB), there were 351 polluted river stretches in the country, in which the biological oxygen demand (BOD) content is more than 3mg/L.

Dissolved oxygen is consumed by bacteria when water contains large amounts of organic matter from sewage or other discharge. A low BOD is an indicator of good quality water, while a high BOD is indicative of pollution. The tribunal directed that action plans be prepared to rejuvenate these rivers and ensure that they are at least fit to bathe in. 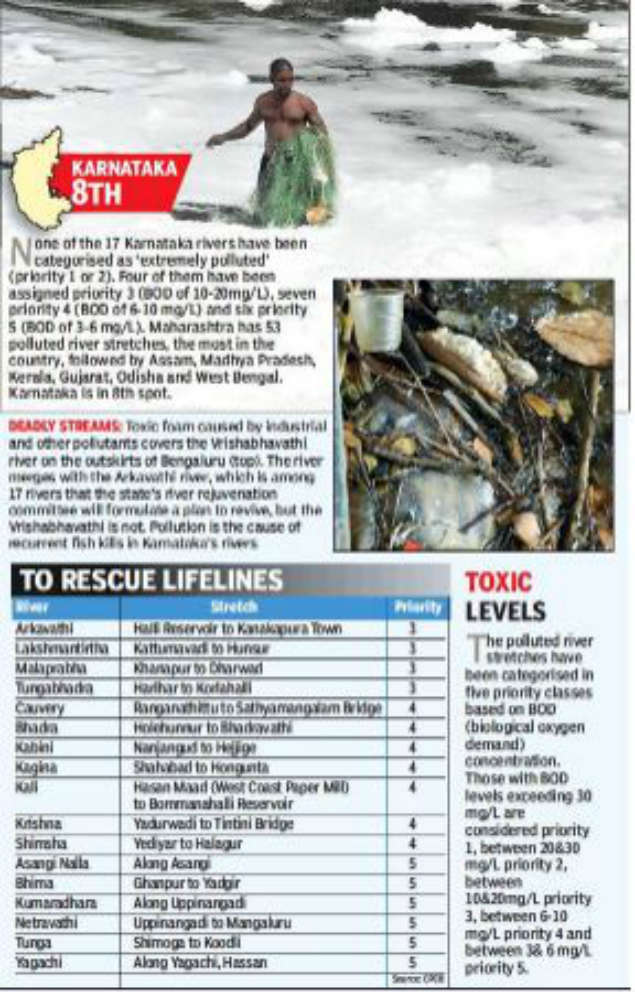 According to a government order issued on November 24, the principal secretary (ecology and environment) forest, ecology and environment department will be the chairman of the river rejuvenation committee. The head of the Directorate of Municipal Administration and the commissioner for industrial development and department of industries and commerce will be the members of the committee and the Karnataka State Pollution Control Board (KSPCB) member secretary will be its memberconvener.

The committee will have to prepare the action plan and will serve as the monitoring committee for its execution. The polluted rivers will have to be fit at least for bathing within six months of the plan’s approval. The action plan will have to “include components like the identification of polluting sources including functioning/status of STPs/ETP/s/CETPs, solid waste management and processing facilities, quantification and characterisation of solid waste, and trade and sewage generated in the catchment area of polluted river stretches”.

The plan will have to look into issues relating to groundwater extraction, irrigation practices, flood plain zones, rainwater harvesting, groundwater recharging, maintaining minimum environmental flow of rivers and plantations on their banks. It will also have to look into interception and diversion of sewage carrying drains to the STPs and emphasise utilisation of treated sewage to minimise extraction of surface or groundwater.

The action plan should have a ‘speedy, definite or specific’ timeline for the execution of steps, and provisions may be made for pooling of resources, utilising funds from state budgets, local bodies, the state pollution control board and central schemes. A website should be set up to invite participation from educational and religious institutions as well as commercial establishments and progress reports must be emailed to the NGT on or before December 15, the NGT said.

“We will have a meeting on December 3 to discuss the problem, and possible solutions. Once the plan is approved, we will submit it to the government and it will direct the civic agencies concerned to implement the plan. Most of our rivers, are in the ‘C’ category, meaning they are fit for drinking after treatment,” KSPCB member secretary Manoj Kumar said.

The plan was to be drafted within two months of the September 20 directive, but this was not done as the order to set up the committee came much after the directive, he said.

Sharachchandra Lele, senior fellow and convenor, Centre for Environment and Development, Ashoka Trust for Research in Ecology and the Environment, called for expansion of the river monitoring proposal.

“The highly polluted Vrishabhavathi river has not been included because it is not being monitored under the programme,” he said. “Also, the focus should not just be on BOD levels, but also on industrial pollutants.

The committee should be expanded to include those who have been trained in and understand water management. As for the action plan, it should focus on enforcement, especially polluting industries and biological contamination, a result of untreated sewage, and financial support.”

The situation is particularly dire in smaller towns, many of which either have inadequate or no treatment facilities, he said.